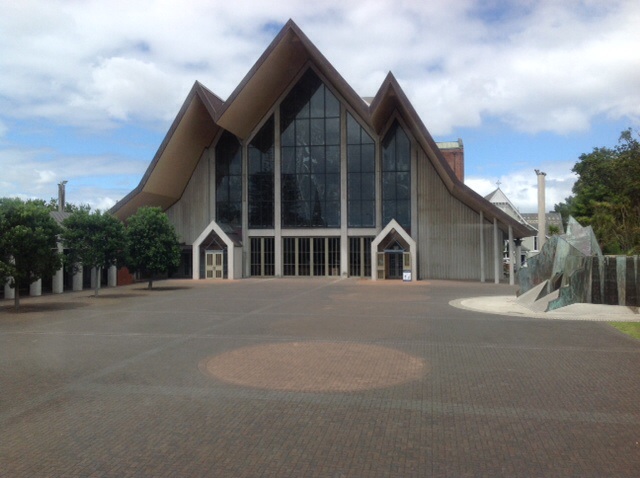 Today was"Bus Day " and started at 10.30 am from the camping to downtown Auckland. The route this bus was following was through Great South Road into town. I was amazed how many car dealers have their business on both sides of this road all the way into town. It must have more than 300 hundreds as it lasted for miles and miles. This is even more remarkable as NZ has a population of 4,5 million and 1.5 million are living in Auckland What I noticed is that the roads in NZ were not busy at all but this is well compensated in Auckland. I am glad we do not have to do this every day. In the city we bought tickets for the Hop on~Hop off bus which are separated by two lines and area's. These buses are sightseeing buses and you pay $ 40 for a day. Unfortunately when hopping of it takes some extra time to get the next bus so we only changed by the Auckland Museum,had a coffee and a caramel pie. Nevertheless we saw some interesting places in that short time like the Holy Trinity Cathedral,where the funeral of Sir Edmund Hillary, who was the first to limb Mt Everest ,was held herein 2008. The Eden Park which is NZ largest stadium with up to 60.000 seats where Rugby { The all Blacks } and Cricket matches were held. Tickets for the Rugby Word cup final in 1987 and 2011 were sold fora price of $ 400 up to $ 1200. The most eye catching building of Auckland is the sky tower of 328 meter and offers a breathtaking view for up to 80 km in every direction. It hosts a (C) asino, 2 hotels ( without a room for use on the 15th of Feb) and over 25 restaurants bars and cafés. The day before we visited the America cup viaduct harbour. As you probably know NZ has a long history of involvement with the America cup Yachting regatta and was very proud being the second country in 100 years to win the cup in Dan Diego. Actually it will take me hours to describe and visit this interested city. Around 3 pm we took the bus back to the camping in Manukau and arrived at 17.15 pm . Time for a drink and starting the Barbie. By the hot plates and Barbie 5 guys had filled it up with steaks, sausages, mushrooms & onions. I asked if I could use a spot to cook the Hamburgers and they replied " no worry mate ,put back your burgers and eat this" Those guys are going to the concert tomorrow of EMEM . I had some of their food and traded it with some Dutch Grolsch,which was highly appreciated.