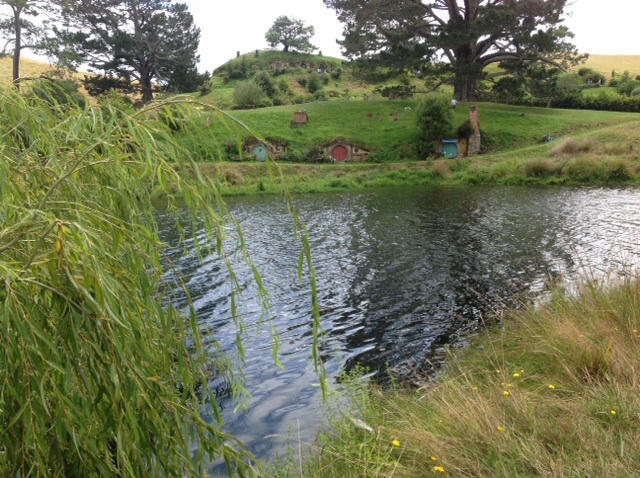 Today we experienced the real Middle Earth with a visit to the " Hobbiton Movie set", the bucolic setting for the Shire that featured in Sir Peter Jackson directed film, " The Lord of the rings" and " The Hobbit Trilogies.It was a sunny day and took us 50 minutes drive. After we bought the tickets we had to wait till a bus drives us through the picturesque 1250 acres of Alexander sheep farm with spectacular views across to the Kamai ranges. A guide explained in approx 2,5 hours the details of how the Hobbiton movie set was created. The hobbit holes (44 pcs), the mill, the Green Dragon Inn (were we got a ginger beer) and other structures were built on a piece of Waikato farmland and transformed into the " The Shire from middle earth" The holes with their little furniture and tools were created with untreated timber, ply and polystyrene . The first oak tree that overlooks Bag End was cut down and was transported in from near Matamata. Artificial leaves were brought from Taiwan in and individually wired onto the tree. Even the army of NZ was involved in assisting with the construction. Filming for Lord of the rings commenced in Dec.1999 and took 3 months. Filming the Hobbit trilogies began in October 2011 and took only 12 days. At Its peak 400 people were involved. We both were pleased to see this in real and realize how much work is involved to create a perfect set.